Co-founder of Immersed In Music, band mentor, and songwriting and music theory instructor 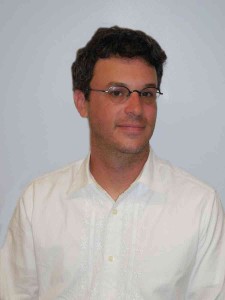 Rick Batley’s love of music started at an early age listening to his father’s eclectic record collection. In fifth grade he saw his first concert, The Black Crowes at Hershey arena, which solidified his love of music. He joined the school chorus, started singing and, at age 14, he bought his first guitar. Within a year, he was working at Triple R Guitar in Lemoyne, where he later met Jeff Abercrombie, former bassist of the nationally known band Fuel. By age 17 he was working as a roadie for them on weekends, while going to school and continuing at the guitar shop during the week (everyone now knew him as “Baitley”).

In his senior year of high school, he was picked to try out for state choir, but turned down the opportunity because he wanted to focus on playing rock music. Eventually, he was let go from Fuel “because of a lack of experience.” Ironically, he was next hired as a stage manager with The Black Crowes. After two months of non-stop touring in Europe, he decided to quit working for bands and try to make it as a musician in a band. After working in various bands for about a year, he was asked to join the local artist, Darcie Miner.

The Darcie Miner Band was signed and started recording their first major label record for Beyond Music but, unfortunately, the label folded before release of the record. The band continued to shop for a deal and toured heavily for more than another two years After difficulties with management and issues within the band reached a climax, Rick decided to stop playing music and focus on family. So at age 28, he and his wife Susan welcomed their first child Henry and, two and a half years later, their second child, Aiden.

A year after their first child, Rick started an artist management company, the RTE Group, in an effort to make sure that bands didn’t have to go through some of the same difficulties he did. He has continued as manager for the long term band The Jellybricks.

Batley has taught private guitar and drum lessons. In 2012, he began to work with Rick Stevens supervising the 5th-6th grade Kids’ Bands at Londonderry School. In the summer of 2014, he developed a preschool, kindergarten and primary grade music curriculum and has begun teaching these levels at Londonderry Private School.

The initial ideas for what would later become Immersed in Music started while working at Triple R Guitar after a discussion with his boss about the lack of a cohesive music community in the Harrisburg area. “I was really jealous of what I saw in other cities and wanted it here,” says Rick. “…After seeing how bands in other areas supported each other and helped each other grow as musicians, I started to wonder why that couldn’t exist here in my backyard.” He noticed that in all of those “communities,” the bands were friends, shared rehearsal spaces, and played on each others’ records and shows.”

However, the biggest motivation for starting IIM was to teach young musicians to understand what forces influenced their favorite musicians. “Really, I just wanted to create an environment where young musicians could grow and learn the ropes of the music business together, but have mentors who could guide them around the pitfalls. People who had years of experience and could help them learn things the right way the first time, not have to fail five or six times in order to find what works for them. I want young musicians to come out of the gate with a plan, a real plan that they have already tried and know can work!”

For further information about Immersed in Music or to contact Rick: