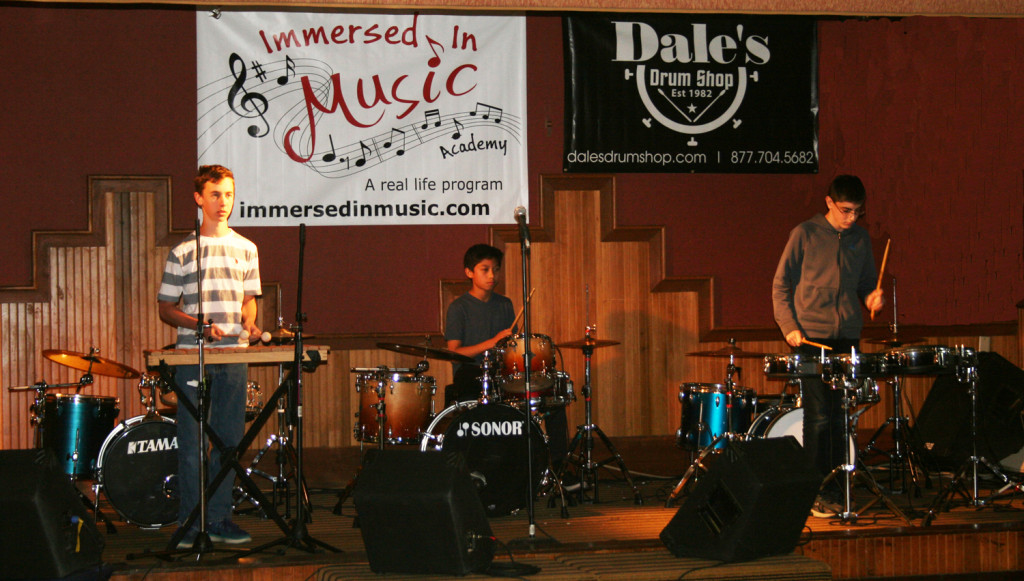 What’s more fun than a barrel of monkeys? How about a drum of drummers! What is a drum ensemble? It’s a band made up entirely of drummers. You know… the cool people who hit things on stage. It’s as simple as all that, yet not quite so simple at all.The ensemble meets for an hour and a half each week. Students gain experience on various percussion instruments, learn music theory, perform in a live setting, and record in a professional studio, all in a safe and fun environment. Each member is dependent upon one another as their individual parts, played on different percussive instruments, are woven together collectively to form a melodic musical composition. Blending these pieces together is no easy task. For example, in our first season the drummers pounded out a tribute to musical giants Led Zeppelin with a medley of “Kashmir”, “Black Dog” and “Stairway to Heaven”. Guitar and bass riffs were brought to life on electronic drums, while vocal melodies were mimicked on the marimba. The discipline the students learned and the bond they formed was highlighted during the ensemble finale. When each member moved to their own drum kit to play collectively John Bonham’s famous drum solo from “Moby Dick.” The second season proved to be even more exciting with the band playing a Star Wars tribute, part of which was charted by one of the Drum Ensemble students. This medley utilized a broader range of percussion instruments and a more melodic musical score.You don’t have to be a drummer to be in a drum ensemble. You just have to have the desire to be a drummer and the dedication to make it to weekly sessions.

Rehearsal times occur in a one and a half hour block weekly on either Mondays or Tuesdays to be determined by the schedules of the band members. Rehearsals will begin mid-September and operate once a week (except for a Winter break in December). Drum Ensemble will conclude by performing at least three performances, along with other bands in the Rockers program, near the end of May and early June.

Tuition for the year is $1,300 per student, payable in either a lump sum or at $130 per month in the first week of each month from August through May (10 months). There is a $130 materials fee due with your application, and new enrollees pay a one-time $25 application fee. Checks are to be made payable to “Immersed In Music.” Credit card payments can be made online through our website.