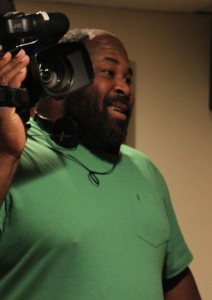 Kyrie George hails from Willow Grove, PA. He is a 2006 graduate of Kutztown University’s Electronic Media program. Shortly after college he worked in the Lehigh Valley area as an audio visual technician for the Visual Sound company. In 2007, Kyrie moved to the mid-state area where he began working at abc27 news (WHTM-TV) as a video editor for the morning newscast. He became a full time news photojournalist in 2008. Since then he has done his best to hone his craft and understanding on how to tell good stories.

Kyrie has been recognized by the Associated Press and nominated by the National Academy of Television Arts and Sciences. April 2015 marked eight years being in the news field. He currently holds the overnight photojournalist position where he covers breaking news and assists with morning newscast duties. The road to improvement never ends.